Malaysia is to Create Vaccines Production Based on Russian Technologies 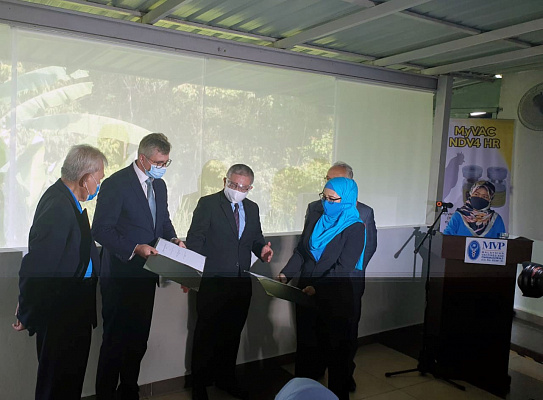 On October 26, 2021, in Puchong, Malaysia, a memorandum of understanding was officially signed between the local animal vaccine manufacturer Malaysian Vaccines and Pharmaceutical Sdn Bhd (MVP) and the Saint Petersburg Institute of Vaccines and Serums (FSUE SPbSRIVS FMBA).

At the ceremony, Rashidah Ibrahim, MVP’s CEO, said the company planned to produce up to 10 million doses of Halal vaccine by 2024. “We hope to be the first organization in Malaysia that produces human vaccines to help our country in its endeavor to become a vaccine producing country,” added Rashidah Ibrahim.

Subject to the memorandum signed, FSUE SPbSRIVS FMBA will act as a technological partner and technology donor for the production of a tetravalent influenza vaccine and will provide its transfer to MVP production facilities. Influenza vaccines produced in Malaysia are planned to be supplied to the Southeast Asia and some countries of the Organization of Islamic Cooperation (OIC).

The official event was attended by the Minister of Science, Technology and Innovation of Malaysia, Dr Adham Baba, who previously served as the country’s Minister of Health, and the trade representative of the Russian Federation in Kuala Lumpur N.V. Ponomarenko.

Malaysian Vaccines and Pharmaceutical Sdn Bhd (MVP) has 27 years of experience in the production of animal vaccines and is the largest Malaysian enterprise in this industry.